The place you’re first stepping into when you get to Bali would be Ngurah Rai International Airport—Bali’s one and only airport hub located in Kuta. Although Bandara Ngurai Rai is considered one of the best airports in Indonesia in terms of facilities and services, sadly, there is one important aspect that is overlooked. The Ngurai Rai Airport taxi is definitely not the best transportation to escort you out of the airport.

Can’t you just chose other means of transportation then? No, it’s not as simple as that. Even Indonesia’s largest taxi company, Blue Bird, is not allowed within the airport grounds except for passenger drop-off.

They are not allowed to get passengers inside the airport. This also applies to all other means of public transportations except the Sarbagita, which we’ll get into later.

The taxis that are labelled as “official” Ngurah Rai airport taxi is easily the most expensive taxi fare you can find in Bali, with price that easily multiply the public transportations you can find outside of the airport. 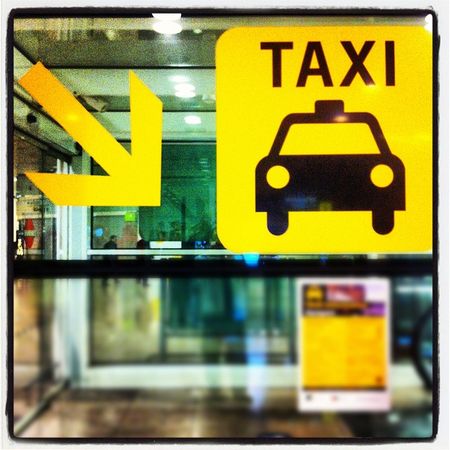 As you step foot outside, you’ll be immediately greeted by a mob of seemingly random people offering you their service. This is especially apparent if you’re solo travelling. Countless of people will approach you and say “Taxi, mister?” “Taxi, miss? “Hello, Taxi?” To the point of being a complete nuisance.

However, don’t be surprised. This is an everyday occurrence at the paradise island’s one and only airport hub.

Even though most of the people who approach you are actually those from the official Ngurah Rai taxi drivers, they just seem shady because of the constant pestering.

Sadly, Ngurah Rai airport does not seem to have regulations when it comes to their taxi drivers’ communication with the customers. If they do, then they don’t enforce it. We don’t want to discourage you to visit Bali; but that’s just the reality. And there are plenty of ways to get outside of the airport safely without the Ngurah Rai Airport Taxi.

Be Indiscreet and Get an Online Taxi

Online taxis have the advantage of blending in well because they look just like any other car owned privately. It’s a bit tricky, but locals and savvy tourists alike do this everyday.

Online taxis are hundreds of times cheaper compared to most public transportation methods in Bali. However, you still need to be indiscreet. Once you have access to your online taxi applications, don’t let your phone to be seen obviously.

Ngurah Rai taxi drivers who greeted you will often try to take a peek at your phone screen. So make sure to use a screen filter app to help protect unwanted visions. Online taxi drivers usually avoid approaching passengers. Often times, they will tell you to find them in the parking lot.

This is a very common method used by locals everyday as it would seem as if you’re approaching someone you already known who have been waiting for you.

Sarbagita is a legit way to get out of the airport and to your destinations. It’s the cheapest way among all methods, starting from 3,500 IDR for adults and does not reach 10,000 IDR.

The catch is; Sarbagita routes are very limited, and they only stop at the very few bus stops they have around the route. But it’s a good way to go if you simply want to get out of the airport, then catch a bluebird or a grab/go-jek after. A pretty neat trick.

Go outside of the airport to catch a Blue Bird

Blue Bird is Indonesia’s largest taxi company, and you might want to use their service again once you’ve tried it on your trip to Bali before. This is totally doable if you’re not bringing huge or overly heavy suitcases and need that little walk after a long flight.

That’s the ways if you need to avoid the expensive Ngurah Rai Airport taxi. Give them a try and you will find the cheaper one.